Bored with your brand?

Feel like the magic is gone from your copy?

Or like you’re just a (forgettable) face in a sea of competition?

Maybe you just need to rethink your positioning.

Trying something unexpected can make your audience look at you –and desire you! — in a whole new way.

Now I’m not talking about doing or saying something that is wildly out of character for your brand.  That’s called violating your brand personality.

Stunts like these reek of inauthenticity, and at best all you can expect is confusion. Even if your attention-grab succeeds at first, it sets you up for a charade that would be a struggle to maintain.

But sometimes a brand that’s been around for a while, especially if me-too competitors abound, needs to do something out-of-the-box  – yet still “on-brand”–  to get people to take a fresh look.

My winner for smart use of positioning today is Snickers.

Yes, the candy bar with the peanuts that’s older than dirt.

Except, Snickers doesn’t position itself as just a candy bar, but instead as something you reach for when you’re “hungry.”

By doing this, Snickers has positioned itself against NOT other candy bars but:

How does Snickers have the right to do this?

It has peanuts in it… which technically does qualify as “real” food. And it’s true that when you eat a Snickers, it really does take the edge off your hunger between meals. (When I was a kid this was known as “spoiling your appetite.”)

In fairness, this idea isn’t new; it’s been part of Snickers’ brand for decades. Those of us of a certain age remember the dull but clear slogan, “Packed with peanuts, Snickers really satisfies.” But they’ve now taken this idea to a new level.

(Hats off to the ad agency BBDO for doing something creative that built on the brand heritage but at the same time repositioned Snickers against the kinds of things you’d expect to buy at Whole Foods.)

Because of the peanuts and the positioning, Snickers allows consumers to rationalize their impulse to scarf down a candy bar at 4PM.

The fact that it ruins their appetite is simply proof it “works.”

As if chocoholics needed any more convincing, Snickers even upped the consequences of being “hangry” with their brilliant  and multi-award-winning “You’re not YOU When You’re Hungry” campaign.  If you don’t manage your hunger with a Snickers, you’re not on your game, and you  turn into an Incredible Hulk-style grouch!

This concept has “legs”, as we say in the ad biz. Here’s the Snickers commercial that broke the campaign at the 2010 Super Bowl!

This campaign is still running strong.  It’s so popular, they’ve even carried it over to their product packaging. 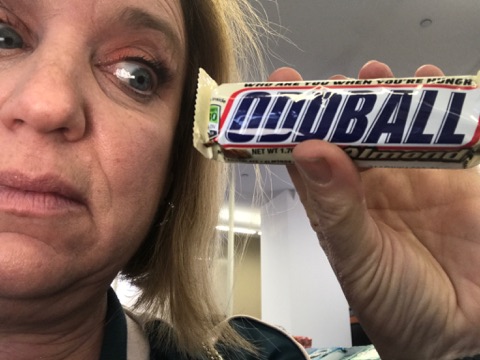 But Snickers’ “anti-hunger” positioning lasts because it plays into a truth that we’ve all experienced: people in our lives (ourselves included) who act out of character – usually rudely – when irritable because of a growling tummy.

So now, Snickers isn’t just a “healthy-ish” snack but also the heroic guardian of all those relationships you’d ruin if you let your hunger dictate your behavior.

It you eat a Snickers, you can save your friendship, your marriage, your career – all while excusing the behavior of the horrible person you become when peckish. So go ahead and indulge in that candy bar before dinner. It’s for everyone’s own good!

I know it sounds ridiculous. But it WORKS. It sells candy. It makes the consumer feel good about eating it. And – to the point of this article – it makes the brand distinct from all its “normal” competition. (Even the other candy bars made by the same manufacturer, Mars.)

So, what does this mean to YOUR brand?

I invite you to look for unexpected ways to reposition that work with your current brand but take a fresh angle:

1. Shake up the competition.

Now think broader. Who or what else COULD be your competition? How else could your customers solve their problems besides working with or buying from you? If you are a relationship coach for single women, what if you positioned yourself against online dating? Singles cruises?

For one of my clients, a business coach, we positioned her 6-month business course for wellness practitioners against a year’s tuition at Harvard Business School. Suddenly, her course’s $4500 tuition –with its money-back guarantee – looked pretty good against the $84,000 of Harvard (which last time I looked does NOT offer its grads any guarantee they’ll recoup their investment!)

Sometimes we forget the larger purpose of our work and products. It pays to revisit when building your brand.

What are you REALLY selling? What is – or could be – the “end-end” emotional benefit? Think past the nuts and bolts.

Lowe’s did this, literally. Once just a hardware store, Lowe’s started selling “Home Improvement”. People who came in to buy screws weren’t just fixing something around the house, they were improving their home for themselves and their families. Suddenly, a chore became something like a grand project or an adventure. This new positioning also allowed them to sell more than hardware: things like plants and barbeques.

It also feels better. And when you make people feel better (or convince them that they will), it sells.

This is why you see insurance companies selling “peace of mind”, not insurance.

What’s the end-end benefit or ultimate truth behind what you are selling? A happy marriage? A life of vitality where the customer lives to play with their great-grandchildren? If you have your own business, why did you start it? What important emotional problem do you ultimately solve? Why does your brand truly exist?

3. Look for the Gap and Stand in It

What do you have that your competitors don’t? It could be something that seems trivial. For example, Snickers has peanuts. Hersheys and Heath Bars don’t.  It’s just an ingredient, and not even a proprietary one. But it is a point of difference, and Snickers leaned on it.

Real Estate attorneys are dime-a-dozen. But how many also are chefs, surfers or race Formula 1 cars?  What would happen if you leaned on your point of difference? How does what’s different about you give you a unique perspective, skill or perk that benefits your client?

What do your prospects complain about when trying to get their needs met another way —  that you solve, or don’t have as a downside? Could this seemingly minor thing be the cornerstone of your brand story?

4. Be first and stake your claim.

Snickers has peanuts. So do peanut M&Ms, Payday, Baby Ruth and many more. But Snickers was first to claim the territory of “hunger-killer”. No other candy can now occupy that space the same way.

Don’t worry about who else could claim your space. If you do it, and do it first, it’s yours. They can try, but they’ll just look like copycats. You will have invented the category. That makes you the leader. It’s as simple as that.

If you are tired of being seen as a commodity (oh look—another life coach!) try positioning yourself unexpectedly, and leave your competition in the dust.